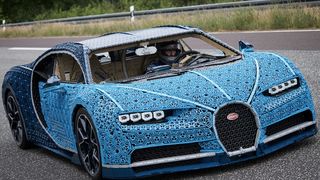 LEGO has just gone beyond what anyone imagined was possible for a toy, building a 1:1 LEGO Technic replica of the $3 million Bugatti Chiron out of more than 1 million Technic elements — and you can actually drive it.

In the video above you can see the incredible construction in action as it’s taken for a spin on the same German track where Bugatti tests its new vehicles. What’s more, it was even taken for a spin by official Bugatti test driver, Andy Wallace, who drove the OG Chiron when it was still in development.

Those 1 million-plus LEGO Technic pieces include the engine and were put together without using glue, with the whole thing taking 13,438 hours to develop and assemble. According to TechCrunch, brainstorming started back in June 2017, with construction kicking off in March this year.

Just building something life-size that looks like the Chiron is amazing, but the fact it’s actually drivable, hitting a speed of around 13mph, is mind-blowing. It’s quite a bit slower than the OG’s insane speeds, but a fantastic achievement nonetheless.

The LEGO Technic Bugatti Chiron will be officially unveiled at Monza in Italy on August 30 ahead of the Italian Formula One Grand Prix.

Do you want to build your own LEGO Bugatti? Sound off in the comments.

Now here’s everything you need to know about the Ferrari Portofino.

This One-Off Bugatti Chiron Hermès Is Truly a Work of Art
DesignsponsoredDecember 30, 2019