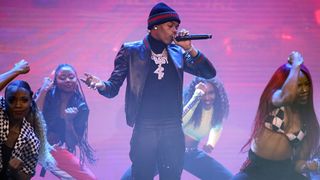 Fresh from appearing on Travis Scott and Cactus Jack’s new album, JACKBOYS, Lil Baby is the first musical guest of the decade on NBC’s The Tonight Show Starring Jimmy Fallon. The 25-year-old rapper hit the stage last night to perform his latest single, “Woah,” which dropped in November.

Lil Baby showed up to his Tonight Show performance decked out in Gucci and several pieces of jewelry. Prior to hitting the stage, the Atlanta artist took to Instagram to give us a better look at his outfit, which consists of a Gucci beanie, leather Gucci jacket and matching pants. He’s also pictured wearing multiple chains and bracelets, a diamond-studded watch, and multiple rings.

“Woah” is slated to appear on Lil Baby’s upcoming sophomore album, My Turn, his first full-length project since 2018’s Harder Than Ever. The LP will also feature Future-assisted single “Out the Mud” and is expected to release in the first few months of 2020.

Lil Wayne’s “Fallon” Performance Was Overshadowed by His Beret
MusicsponsoredFebruary 6, 2020