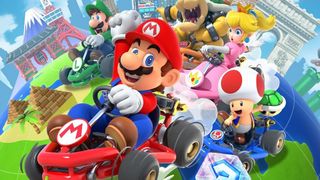 Following a delay, Nintendo‘s anticipated new mobile Mario Kart game, Mario Kart Tour, has received an official release date. The title is scheduled to come to iOS and Android devices September 25. Nintendo made the announcement this week via Twitter, also sharing the pre-registration link where customers can go ahead and sign up for the game.

Pre-registration for Mario Kart Tour is now available! For more details, please click here: https://t.co/loB3wf6eOv#MarioKartTour will be available on 9/25. We hope you’re looking forward to getting behind the wheel of this new game! pic.twitter.com/afPFp94iNi

Nintendo originally announced its new mobile Mario Kart game last year, as the company was aiming for a March 2019 launch. They then decided to push back the release date to improve the quality and expand the content offerings.

Per the Android-only closed beta from earlier this year, Mario Kart Tour features an expansive roster of characters and offers numerous in-game purchases. Again, the mobile game will be available for iOS and Android devices September 25.

Go On a Tour of Dubai With amongst few’s Latest String of Collabs
StylesponsoredDecember 6, 2019
What To Read Next
Load More
Search Results
Load More