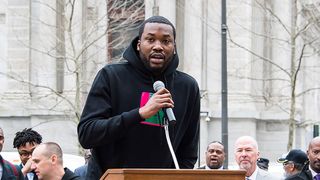 Meek Mill was joined by Van Jones at Philadelphia’s Municipal Services Building on Tuesday on behalf of their criminal justice reform organization, REFORM Alliance. Addressing a crowd gathered outside the building, they unveiled plans for legislation that would attempt to reform Pennsylvanias probation and parole system. In the video above, Meek Mill speaks at the 32:45 mark.

The pair were joined by REFORM’s Michael Rubin in addition to state Democrat and Republican politicians. Proposed House Bill 1925 aims to prevent courts from sentencing an individual to consecutive probation sentences, prevent courts from extending someone’s probation or parole due to nonpayment of fines and fees, and establish an incentives program to reward good behavior. In addition, the bill seeks to prevent re-incarceration for drug tests testing positive for marijuana, associating with someone with a criminal background, or traveling beyond the jurisdiction of the court.

“I speak for the people who don’t have a voice,” Meek said to the crowd. “This proposed bill is the first step in changing the criminal justice system and it’s only right that we start in my home state,” Meek said. “I’ve lost too much time away from my son, my family, my friends and fans in Philly because of outdated probation laws, so I want to make sure people don’t have go through what I did.”