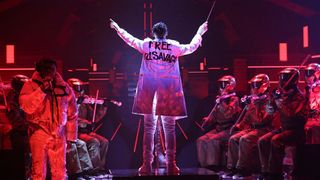 Last night, Metro Boomin’ made a special appearance on The Tonight Show. During the episode, he performed his Not All Heroes Wears Capes hit “Space Cadet” with Georgia rapper Gunna while wearing a jacket printed with “Free 21 Savage” on the back. This display of support follows the 61st annual Grammy Awards where many of 21 Savage‘s peers and collaborators remained silent on his recent ICE detainment.

Post Malone neglected to speak about the rapper’s arrest even though he performed their hit single “Rockstar.” Later on, it was revealed that he was wearing a 21 Savage t-shirt underneath his blazer though (and he previously posted about the ordeal on Instagram). Ludwig Göransson, the producer of Childish Gambino‘s award-winning song “This Is America,” was the only artist to mention 21 Savage that night when he said that the rapper “should be here” during his acceptance speech for Record Of The Year.

Watch the full performance above and stay tuned here for more details regarding 21 Savage’s fight against deportation from the United States.