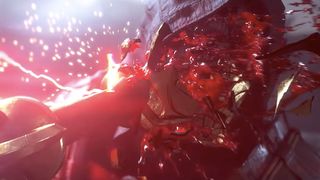 The trailer for Mortal Kombat 11 has arrived and the series’ blood-spilling, bone-breaking savagery looks more cinematic than ever. Watch every hi-res, skull-smashing moment in the trailer up top. And if the gore isn’t the draw, the clip is soundtracked by a new 21 Savage track, “Immortal.”

The sequel was revealed by OG co-creator Ed Boon at The Game Awards yesterday. Developer NetherRealm Studios promises all-new custom character variations to let gamers change existing characters and build their own. The game will see the return of “Klassic” fighters such as Raiden and Scorpion — as seen in the trailer — and promises to add a few new faces as well.

Boasting a new graphics engine, Mortal Kombat 11 promises to make every special move and fatality a visceral and thoroughly unpleasant experience for all (in a good way).

Mortal Kombat 11 drops globally on April 23, 2019, with a community reveal event planned for January 17. Preorders are open now and necessary if you want access to villain Shao Kahn and the game beta.

Are you hyped for Mortal Kombat 11? Get over here and share your thoughts in the comments.

In other news, Kevin Hart has stepped down as Oscars host after homophobic tweets resurface.