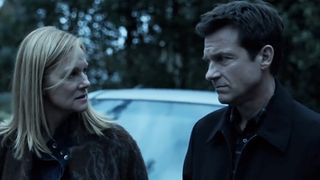 Netflix has shared the official trailer for season two of its original series, Ozark, and things are looking all the more bleak for Marty Byrde.

Played out against a cover of David Bowie’s “The Man Who Sold the World,” the trailer shows Marty (Jason Bateman) and his family pulled further into the world of drug cartels as officials close in on their operations. To keep his family safe, including wife Wendy (Laura Linney), Marty must put his morals to the test as he faces the power-hungry Snells, the cartels, and their new deputy Ruth Langmore (The Americans‘ Julia Garner).

The new promo was unveiled over the weekend at the Television Critics Association’s press tour in Beverly Hills. During a panel discussion, Bateman told critics that season two ups the ante, saying, “The audience deserves an escalation.”

The new season premieres in full on August 31.

Watch the trailer above and let us know your thoughts in the comments below.