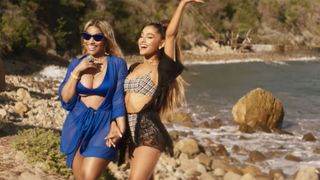 Nicki Minaj and Ariana Grande have shared the official music video for their “Bed” collaboration. Featuring Nicki Minaj as a mermaid and lots of sultry beachside scenes, it is one of two visuals for their song on Minaj’s upcoming album Queen. The Queens rapper revealed on Twitter Friday, July 6 that there will be two official videos with two different directors for “Bed,” with the second one coming in a week.

One more thing; there r 2 #BedVideo edits, as there were 2 directors involved. You’ll see the first today. ??? also, it won’t be on vevo for like another 24 hours. You’ll see it on YouTube until then. I’ll prob release the other edit in a week. Idk. ????‍♀️? ?

The duo recently dropped a video for Ariana Grande’s “The Light is Coming” from Grande’s forthcoming album Sweetener. Revisit it below.

In other music news, a new report shows Drake has a pretty significant impact on Toronto’s tourism economy. Get the full scoop right here.