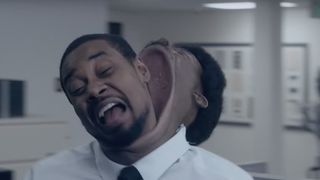 Ahead of the premiere of The New Negroes on Comedy Central this Friday, co-creator Open Mike Eagle and their first guest, Danny Brown have released a new song and video. “Unfiltered” from the forthcoming stand-up comedy music series sees Mike’s workplace persona disintegrate as his unfiltered alter ego (Danny Brown) breaks just about every rule of office etiquette.

The video opens with Mike being pulled over by police on his drive to work. Later, as a co-worker clips her nails at her desk Mike is pushed to the edge. Danny Brown then emerges, literally, from inside Mike’s mouth. In a Men in Black-style head flip manner, Danny Brown takes over his body and wreaks havoc on the surrounding cubicles and communal microwave. Mike manages to take back control but now for long, and Brown returns to obliterate the water cooler.

The New Negroes With Baron Vaughn and Open Mike Eagle airs April 19 on Comedy Central with a simulcast on BET. Each episode will feature stand-up sets and an original song and music video by Mike and a musical guest which include MF Doom, Lizzo, Hannibal Buress and Method Man among others.