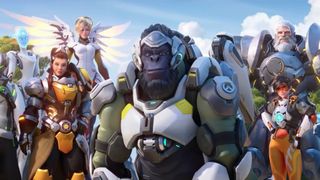 Right off the heels of announcing Diablo IV, Blizzard reveals Overwatch 2, the sequel to the popular team shooter Overwatch, at BlizzCon 2019. This time around fans can expect an actual story mode with what appears to be PVE content, a first for the game. Players will face off against a multitude of enemies and will be able to level up their heroes and customize their abilities.

PVP, the games bread-and-butter, see’s new modes, maps, and heroes to be added to the existing 31 character lineup. The game will also still heavily feature six-versus-six team combat, alongside a new core “Push” mode. Overwatch players will also be able to jump into the fun with cross-game multiplayer. Players from the original and sequel will be able to face-off against and with each other. The original game will have access to the new heroes and maps.

Overwatch 2 is still in development, so no release date yet. Watch both cinematic and gameplay trailers above.