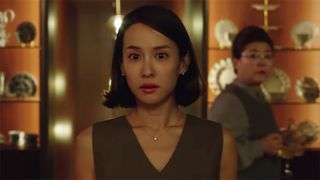 Bong Joon-Ho’s much-anticipated new movie, Parasite, gets one final trailer before hitting theaters stateside next week. Having already taken home the prestigious Palme d’Or award at this year’s Cannes Film Festival, the genre-bending film has gone on to receive rave reviews from numerous critics, as you will see in the new clip.

You may find it hard to grasp exactly what’s going on in Joon-Ho’s Parasite from the two trailers, but be mindful that this is very much on purpose. We do know, however, that the movie centers around two families, the Parks and the Kims, one rich in wealth and the other in street smarts. The two houses are brought together when the Kim children position themselves as a tutor and art therapist to the Parks. Fast forward, and we see a tug of war for dominance that will threaten to destroy the relationship between the two families.

Bong Joon-Ho’s ‘Parasite’ Streaming on Hulu Is Just What We Needed
MoviessponsoredApril 8, 2020

Bong Joon-Ho & the Creators of ‘Parasite’ Are Being Accused of Plagiarism
MoviessponsoredFebruary 20, 2020
What To Read Next
Load More
Search Results
Load More