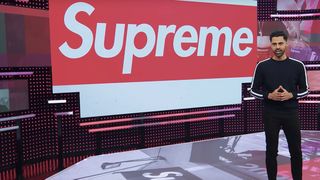 For the latest episode of his show Patriot Act, presenter Hasan Minhaj took a deep dive into the origins of Supreme and the investment history of the Carlyle Group, which owns 50 percent of the brand. Check out the episode above.

The comedian discusses the evolution of Supreme’s box logo (using Highsnobiety’s video on the subject, no less) and explained the brand’s limited-supply and demand business model.

On a darker note, he revealed the Carlyle Group’s military investments, which he links to Saudi Arabia’s involvement in the Yemeni civil war.

Minhaj finishes the episode by dropping a limited run of now-sold-out tees that flip the Supreme box logo into the slogans “Defense Contractor,” “Corporation,” “Private Equity,” “Oil and Gas,” and “Barbara Kruger Was Right.”

In other style news, Advisory Board Crystals drops limited-edition Warhol-inspired tees at the Whitney Museum.

Supreme’s Latest The North Face Collab Is an Ode to the Statue of Liberty
StylesponsoredOctober 28, 2019