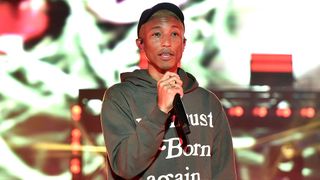 Pharrell Williams and Chad Hugo are back together again on a new track from Netflix’s The Black Godfather documentary about influential music executive Clarence Avant. Titled “Letter to My Godfather,” the song — written by Williams and Hugo — finds an auto-tuned Pharrell singing over production by Hugo.

Press play above to stream the tune.

“Clarence Avant connects us all through his incredible impact since before I was born up until now,” Pharrell said in a statement. “He’s the godfather to so many of us—and not just African Americans, most of the industry.”

Music. Power. Respect. Clarence Avant used them to empower people of all colors to change the world. "Letter To My Godfather" is an original song by me and @ChadHugo​ from the @Netflix​ documentary #TheBlackGodfather in select theaters and on Netflix.https://t.co/HEqhKlBBSY pic.twitter.com/WXUu2QNZvf

Avant is largely responsible for helping jumpstart the careers of numerous black artists, dating back to the 1940s. Netflix’s The Black Godfather documentary explores the rise of the music executive, while featuring testimonials from those influenced by Avant, ranging from Barack Obama and Quincy Jones to Jamie Foxx and more.

You can catch The Black Godfather now in select theaters and on Netflix.

Rihanna Is Working on New Music With Pharrell Williams
MusicsponsoredFebruary 11, 2020