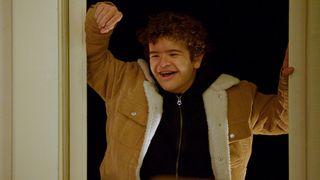 Following backlash surrounding the premise of the show, Netflix shares the official trailer for Prank Encounters with host Gaten Matarazzo, best known for his role as Dustin in Stranger Things.

As alluded to in the name of the program, Prank Encounters is a new prank show that brings together two complete strangers for a terrifying experiment. These unlucky participants are told that they have been given a new job, but instead, their one-day assignments quickly turn into a supernatural surprise. In short, each episode will find two people becoming the stars of their own full-blown horror movie.

Prank Encounters was met with criticism over the summer when the internet presumed that Netflix would be giving individuals false hope of a new job. The streaming service responded in a statement to UK newspaper Metro, saying, “The pranks in Prank Encounters are spooky, supernatural, and over the top, and everyone had a great time. All participants came in with the expectation this was a one-day, hourly gig and everyone got paid for their time.”

You’ll be able to watch season one of Prank Encounters, hosted by Gaten Matarazzo, beginning October 25.

If I were you I probably wouldn't trust anyone this Halloween season… especially me!! ? ?? Are you ready to scream and laugh with me when #PrankEncounters hits @Netflix on October 25?