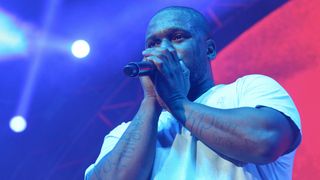 ScHoolboy Q has announced the delay of his new album in the wake of Mac Miller‘s passing. During a recent concert, the Top Dawg Entertainment artist explained to the audience that he needed time to mourn the loss of his friend.

“You know I drop albums every two years, right?,” Q told the crowd. “But listen, with my nigga gone right now, I just don’t feel right putting out an album.” Adding, “As y’all can tell, I’m not my real self right now. I shouldn’t even be here right now. But like I said, my nigga Mac would not want me to be in the house sad. He would clown me for some weird shit. I’m here today because it’s no way he would allow me to sit in the house and be a little bitch. I’m not gonna be a little bitch.”

Q, whose forthcoming album was said to be “90 – 95 percent done,” spoke fondly of the late rapper, later explaining that he doesn’t wish to answer questions about his death while promoting the record.

“I’ma go back, and I’ma figure out when I’ma put this fucking album out, because y’all are going to get this album. I promise that” Q explained. “I’m just not ready to walk in the radio station and the first thing they ask me is ‘So Mac Miller…’ I’m not ready to deal with the questions they have. So right now I’m not ready to put nothing out right now. I’m sorry.”

Miller died on September 7 from an apparent overdose at the age of 26. Authorities have yet to announce the official cause of death. In the wake of his passing, friends, celebrities and fans have expressed their condolences.

Watch the announcement in the video above.

ScHoolboy Q Is Dropping a New Album This Year & He’s “Not Lying This Time”
MusicsponsoredJanuary 29, 2020

A Mac Miller Mural Has Popped Up in His Hometown of Pittsburgh
MusicsponsoredJanuary 8, 2020