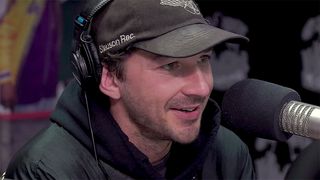 In a recent interview with BigBoyTV, Shia LaBeouf talked about why Kanye West raided his closet and made off with around 70 percent of his clothing.

Building on comments made in a previous interview in which he stated that West “took all [his] fucking clothes,” LaBeouf explained, “he was doing pop up shows at the time, and he just does what he does. The man’s busy. He’s a good man, he’s been good to me, and I got nothing but love for him, actually.”

“In truth I gave it all to him,” he revealed. “I’m a fan. There was no discretion. He could’ve said anything and I would’ve said yes. So when he went into my closet he was like, ‘look, I’m doing these pop-up shows and I need your clothes.’ And I was like, ‘you bet, go ahead.’

When asked whether that meant West was intending to sell the clothes or give them away, LaBeouf said that his clothing was only a small portion of the garments the musician had swagged from various peoples, and that he was using them to dress mannequins in the pop-ups. “He was chasing a sort of authenticity.”

Skip to the 25:35 minute mark in the video above to watch the interview in action.