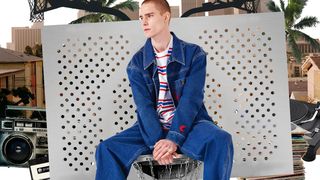 German sneaker and streetwear retailer SNIPES celebrates its 20th anniversary by bringing it back to ’98 and where it all began. The German streetwear retailer has partnered with FILA, New Era, and OG streetwear label Karl Kani for the first collection in a year-long run of exclusive product collabs dropping through 2018.

Dubbed the ‘Back in ’98’ collection, it sees exclusive apparel and sneakers from adidas Originals, PUMA, ASICS Tiger, Kappa, Stance Socks, and Nike all with a heavy ’90s slant releasing across the year. Big on the RnB and hip-hop vibes, styles and cuts are big n breezy (like, perfect for summer if you get us), with bold colors and big logos.

As an added bonus, the legendary designer of the time and one of the OG streetwear designers from back in the day, Karl Kani, has drifted on in and designed an absolute banger of a Canadian tux: a full denim suit, exclusive to SNIPES.

You’re also getting a revived FILA classic: the 96 sneaker. This sits alongside the Italian brand’s “98” football jersey, its taped tracksuit, and New Era’s ’98 style snapback caps exclusive to the drop.

To celebrate its anniversary, of 20 years of street culture, and the launch of the collection, SNIPES held a no holds barred party in its hometown, Cologne with friends, family, and those closest to the brand in attendance. Company top dogs Sven Voth, Ismail Boulaghmal, and Mark Petereit introduced the evening and gave attendees a quick history of the brand’s many achievements. Throwing it back to ’98 when the brand first launched, Voth highlighted pivotal moments such as working with M.O.P., Michael Jordan, and Sisqo before making a few exciting announcements for the future.

According to Voth, SNIPES has plans for entirely paperless, technology-led stores that will open as soon as July 2018. And on top of this exciting news, the company CEO announced that stores will be opening in France and Portugal.

Of course, the Faces of SNIPES campaigns were a key talking point having seen the brand work with globally recognized names such as Kid Ink, Snoop Dogg, Kehlani, Wu-Tang Clan, French Montana, and most recently, Macklemore. But the future is bright, and Chief Purchasing Manager, Mark Petereit, hinted at anniversary collaborations set for this year with Karl Kani, FILA, ASICS, adidas, PUMA, Nike, and Stance. Some of which are revealed soon after during a runway presentation highlighting a few exclusive pieces from the first drop.

Shop the ‘Back in ’98’ drop from April 21 at snipes.com/98 and in selected SNIPES stores. Follow the brand on Instagram for all the latest.

Listen to SNIPES’ ’98 soundtrack below.