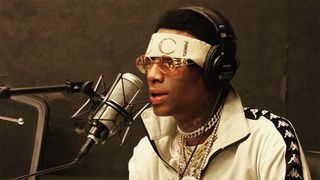 In case you missed it, Soulja Boy has been claiming that he had the biggest comeback of 2018. You may be wondering where the music is, but he insists it’s out there.

Did @souljaboy have the biggest comeback of 2018

Earlier today, the 28-year-old entrepreneur stopped by The Breakfast Club for an hour-long interview that was absolutely filled with quotables. During his time at the studio, Soulja discussed his comeback, his ability to discover up-and-coming artists, his new video game console, and what he has in store. He also sent shots at a number of his contemporaries, namely Drake and Kanye West.

To better detail the interview, we’ve provided the most noteworthy moments/statements from Soulja Boy’s Breakfast Club sit-down below. After checking them out, you can watch the conversation in its entirety above.

He taught Drake everything he knows

While taking multiple shots at Drake, Soulja Boy insisted that Drizzy stole his entire bar from “Kiss Me Thru the Phone,” using it on his 2010 track, “Miss Me.” Yeah, you can hear the undeniable similarities below. You should know that since the two songs came out, Soulja and Drake collaborated on “We Made It” in 2013.

Case closed. Drake been stealing my drip for years‼️🤷🏾‍♂️

#souljaboy says he taught #drake everything he knows 👀>> what do you guys think? pic.twitter.com/d3F6nBAsOV

Soulja Boy went on a rather intense rant about Kanye, not only insulting his YEEZY sneakers, but also honing in on West’s support for Donald Trump. Like many others, Soulja feels that ‘Ye has entirely too much influence to be backing a man like Trump.

His 2018 comeback was bigger than Meek Mill and Tyga’s

You may not be able to point to a particular song, but Soulja Boy is still adamant that he had the best comeback of 2018. After the likes of Meek Mill — who was released from prison and dropped a number one album — and Tyga — who delivered multiple hits, including a number one track — were named, Soulja took shots at both rappers, diminishing what they accomplished last year. He followed it all up by stating that there is no beef with either, however, as he even went so far as to mention doing a song with Tyga.

Soulja feels that he has an ear for talent. He went on to say that he’s largely responsible for a number of newer rappers getting signed. He pointed to discovering Chief Keef, as well as working with the likes of Riff Raff, Lil Pump, Rich the Kid and Famous Dex before anyone else. When asked why he didn’t personally sign any of them, Soulja essentially said that he didn’t want the responsibility of possibly becoming the bad guy if someone flops.

He was the first artist on social media

There’s really no denying that Soulja Boy’s tendency for sensationalism has long since benefited his career. Subsequently, he’s also been somewhat revolutionary in utilizing tools that most artists couldn’t navigate without in present day. For example, Soulja declared that he was the first artist to take advantage of social media, now a key ingredient to many celebrity success stories.

“I’m the reason all these artist have a social media..very artist in the game, every record label owe me 5% bruh”- Did you once think #Souljaboy killed hip hop? https://t.co/TolPFfaB5k pic.twitter.com/NGipdzmUCT

While these are the standout moments, elsewhere during Soulja Boy’s Breakfast Club interview he dove into his new video game console that is currently on backorder, Chris Brown backing out of their fight, his struggles with mental health, and his new movie that’s coming out

Now in other music news, Drake reportedly has a $10 million Las Vegas residency in the works. Follow here for more on the story.

A Timeline of Kanye West’s Complicated Relationship With Slides
SneakerssponsoredDecember 4, 2019