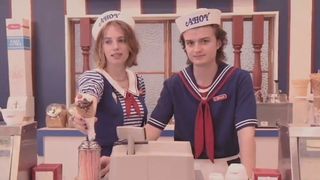 Following an initial look back in April, Netflix this week shares a new trailer surrounding season three of Stranger Things. The clip introduces us to Hawkins, Indiana’s new Starcourt Mall.

The commercial-style footage notes that the mall opens in 1985, leading us to believe that the upcoming season takes place one year after the events from season two. And while the visual doesn’t provide much footage from season three, we do see Steve and newcomer Robin, played by Maya Hawke, working at Scoops Ahoy Ice Cream Parlor in the mall.

Lastly, the teaser ends by saying that Starcourt Mall is “coming next summer,” possibly hinting at a release time for season three.

Press play above for the latest surrounding the upcoming season of Stranger Things, and as always, stay tuned for more.

Next, watch as the ‘Stranger Things’ composers break down the show’s music.