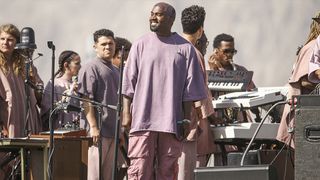 After delivering a spectacular Sunday Service to Inglewood, California last weekend, Kanye West made a last-minute announcement that the experience would be coming to Baton Rouge, Louisiana this Friday.

The open-air gospel service drew thousands to the lawns of Bethany Church, where West and his 80-strong choir opened with “Closed On Sunday” from his newly released album, Jesus Is King  He also performed a stirring rendition of his 2004 track, “Jesus Walks.” Watch above.

According to WBRZ, the huge crowds could be seen from the interstate.

This is about as close as I could get. Hard to see for many. He came out right before 8 @WBRZ pic.twitter.com/rJ8Q7lDbAZ

West performed with his children in tow, and later met with Baton Rouge locals while carrying his daughter Chicago.

Kanye meeting a child (with Autism) after the mother asked if he would last night. Video @jeffonwfmf. ?

While the service itself was free a $49.99 brunch ticket drew comparison to the Fyre Festival catering scandal.

What's going on at Fyre Fest South aka #Brunchella? pic.twitter.com/Aotw4DyCbr

It should be noted that the catering was organized by the promoter and was not affiliated with West or Sunday Service. According to a statement provided to the Daily Mail, “Lauryn’s Fine Catering has been contacted about the poor service and quality of food provided during the event as a paid vendor,” the statement began. “The catering company acknowledges it did not provide adequate food for ONE attendee and a social media post went viral.”