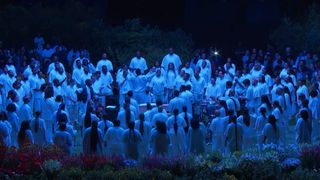 Kanye West headed to Inglewood, California’s The Forum yesterday to host the first Sunday Service since dropping his highly-anticipated new album, Jesus Is King, and its accompanying IMAX movie. Yep, rather than taking some well-deserved time away from the limelight, it would seem that Kanye’s gospel train is only just getting started.

The service included a variety of tracks, including some numbers from previous album Life of Pablo. Of course, most of the attention was on his latest drop, with some of the album’s guest artists — Kenny G and Clipse — joining West on stage for a performance of their collaborative album track “Use This Gospel.”

Alongside Kanye. Kim Kardashian, Kenny G, and Clipse, the Inglewood Sunday Service also saw Pusha-T in the audience and a stage appearance from Kanye and Kim’s daughter, North, as you can see in the video above. Also keep your eyes peeled around the 25-minute-mark, which is when the lighting in the venue changes to blue, reflecting the album’s colorway.

Want more Jesus Is King content? Find out what we made of the album here.