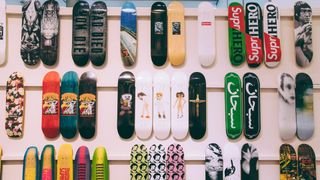 Sotheby’s in New York just became the hotspot for the most impressive Supreme collection to date. Entitled, 20 Years of Supreme, curators Ryan Fuller and Ross Wilson showcase the entire collection of Supreme decks ever created.

First debuted in Los Angeles, this archive includes all 248 skateboard decks created by Supreme from 1998 to 2018, diligently and passionately assembled over decades by collector Fuller. The collection features highly sought after and rarely seen collaborative grails with a number of contemporary artists including George Condo, Damien Hirst, Jeff Koons, Takashi Murakami and more.

The exhibit is filled with extremely rare gems including the controversial Louis Vuitton-monogrammed decks from 2000, which should’ve been destroyed due to the cease-and-desist from LV. The complete “The Last Supper” set is also on display with an added Jesus bonus deck, which comes with the rare Japan-only release. Filled with decks you many never even heard before, it was the Dan Colen five-piece deck set that was the hardest to complete.

“The last deck I needed to complete the collection was the Dan Colen deck,” Ryan Fuller tell us. “One of the five. I had four for years, and it took me ten years to find this last one. It ended up being found in a storage unit from a guy I’ve been working with in China for years. He forgot that he had it.”

Valued at over $1 million, the collection is the only privately-owned complete set of the 248 Supreme decks and will be auctioned off at Sotheby’s on January 25.

“You can take each deck and break them down. Some are crazy expensive. Some are not that crazy, but the fact that it’s the entire collection makes it very unique and valuable. It’s the one and only complete collection of Supreme decks out there,” Fuller adds.

The public viewing of the 20 Years of Supreme exhibit will open on January 20 on the seventh floor of Sotheby’s.

Watch our full interview with collector Ryan Fuller and VP, global & digital strategies at Sotheby’s Noah Wunsch above and let us know what your favorite Supreme deck is.

For more on Supreme, here’s how to see Supreme’s skate film ‘BLESSED’ in theaters.