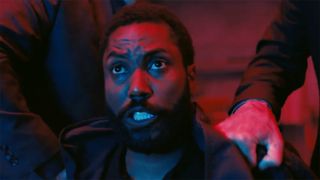 Today Warner Bros. gives us our first look at Christopher Nolan‘s new film, Tenet, starring John David Washington. Due out in the summer of 2020, the action epic finds Nolan once again attempting to bend time.

While little has been shared by way of plot details for the movie, it appears that Washington, who starred in Spike Lee’s BlacKkKlansman, plays a detective. He is joined by a star-studded supporting cast that includes Robert Pattinson, Elizabeth Debicki, Michael Caine, Aaron Taylor-Johnson, Kenneth Branagh, Dimple Kapadia, and Clémence Poésy.

According to Nolan himself, Tenet is “the most ambitious film we’ve made,” with a reported budget of more than $220 million. That figure makes the movie Nolan’s most expensive original film to date.