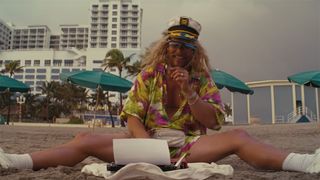 Ahead of the March premiere, this week we get a new look at Matthew McConaughey in Harmony Korine’s (Spring Breakers) anticipated comedy, The Beach Bum. True to the name of the movie, McConaughey portrays just that, a guy named Moondog who is a rebellious burnout living by his own rules.

When he’s not getting high, shooting guns, or driving his exotic cars, Moondog has a knack for writing, albeit he’s begun to piss his talent away. While the plot of The Beach Bum has yet to be truly detailed, it appears that Moondog finds himself in a position where he is forced to write a new novel.

Harmony Korine’s The Beach Bum boasts a star-studded cast, as Snoop Dogg, Isla Fisher, Zac Efron, Jimmy Buffett, Martin Lawrence and Jonah Hill feature in the film alongside McConaughey. You can look forward to the comedy landing in theaters March 29.

what goes down’s gotta come up. you gotta go low to get high. Ride with the Moondog in Harmony Korine’s new comedy THE BEACH BUM rollin into theaters March 29. #TheBeachBum pic.twitter.com/TTesuK5fMt