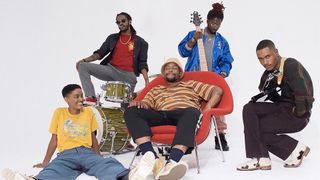 Earlier this month The Internet announced their new album, Hive Mind. Now, following the release of “Roll (Burbank Funk),” the California-based band shares another track from the project with “Come Over.”

The song was debuted today as Zane Lowe’s World Record on Beats 1 on Apple Music, as you can stream it now above.

Hive Mind serves as the followup to The Internet’s third album, Ego Death, written and produced entirely by The Internet. Below you can in turn see the tracklist for the anticipated LP, which is due out July 20. Also, you can go ahead and pre-order a copy here.

In other music news, Kanye West is hosting his album listening party in Wyoming this week.

Tory Lanez Is Breaking the Internet Again With His New Mixtape ‘The New Toronto 3’
MusicsponsoredApril 10, 2020

Kehlani Stakes a Claim to Her Man on New Track “All Me” ft. Keyshia Cole
MusicsponsoredDecember 23, 2019
Follow
Highsnobiety Music
What To Read Next
Load More
Search Results
Load More