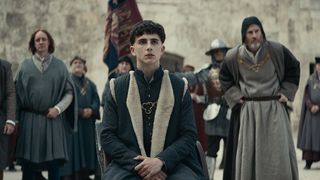 Chalamet portrays Hal in Netflix’s The King, a young prince who feels reluctant about his position as the heir to the English throne. Choosing to abandon the royal life and live among the people, he is then forced to embrace the future he once tried to escape when his father passes away. Crowned King Henry V, Hal is thrust into palace politics and war his father left behind. He ultimately looks to his closest friend and mentor, an aging knight by the name of John Falstaff (Joel Edgerton) for guidance through tumultuous times.

The King is written by David Michôd and Joel Edgerton, and directed by Michôd. Again, it is slated to land in select theaters and on Netflix this fall.