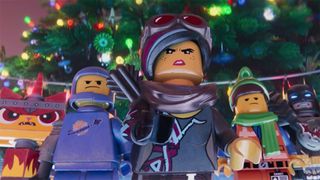 The last time we saw Emmet, Lucy, Batman, and the gang was when Bricksburg was fighting off an alien invasion. In the latest trailer for The LEGO Movie 2: The Second Part, the town is considerably more upbeat as the Bricks are gearing up for the holidays.

The new clip finds Emmet particularly excited for the season, insisting on throwing an epic Christmas party for the entire village. Batman also appears to enjoy the holiday festivites, especially eggnog, as he discloses that he waits all year for the seasonal beverage.

Complete with a Christmas tree you can see from space, watch the latest trailer for The LEGO Movie 2: The Second Part above. The movie — starring Chris Pratt as Emmet, Elizabeth Banks as Lucy, Will Arnett as LEGO BatmanT, Nick Offerman as Metal Beard, and Alison Brie as Unikitty — comes to theaters nationwide on February 8.

For more entertainment, watch Deadpool defend Nickelback in a new ‘Once Upon a Deadpool’ clip.