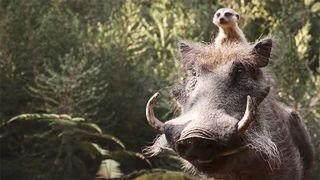 Disney has just dropped another new featurette for the upcoming The Lion King live-action remake and it spotlights Seth Rogen, Billy Eichner, and Donald Glover (Pumbaa, Timon, and Simba) as they sing the iconic track, “Hakuna Matata.” Watch above.

Alongside showcasing the trio splashing around and singing about having no worries, the video also interviews a number of celebrities involved in the new movie, such as John Oliver (Zazu), director Jon Favreau, and (Scar). Beyoncé, who voices Nala, also features.

The Lion King is slated to land in theaters nationwide on July 19.

Seth Rogen Has Been Smoking an “Ungodly Amount” of Weed During Quarantine
MoviessponsoredApril 18, 2020