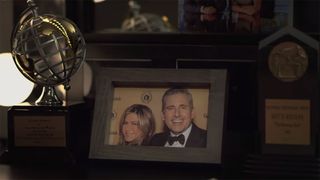 With the platform launching this fall, Apple this week shares the official teaser trailer for one of its upcoming Apple TV+ shows, The Morning Show. Jennifer Aniston, Steve Carell, and Reese Witherspoon star as news anchors in a series that ultimately delves into the intricacies of early morning TV.

While not much is revealed in the teaser trailer — as the actors themselves don’t even appear — Aniston and Witherspoon have previously disclosed that The Morning Show will touch on the complex relationships between men and women on the set of an early morning broadcast. The two female co-stars are listed as executive producers for the program, which also features Gugu Mbatha-Raw, Billy Crudup, Néstor Carbonell, and Mark Duplass.

The premiere of The Morning Show coincides with the fall launch of Apple TV+. Head here for all of the shows and movies coming to the streaming service.

This ‘The Office’ Reunion Is the “Good News” We All Need
MoviessponsoredMarch 30, 2020
What To Read Next
Load More
Search Results
Load More