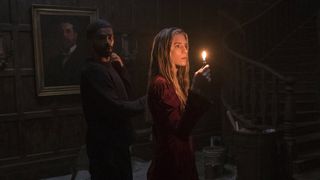 Netflix original sci-fi series The OA premiered back in 2016. Now more than two years later, we finally receive a release date, as well as an official trailer, for the anticipated second season.

According to Netflix, The OA Part II picks up as OA begins her journey in a new dimension, one where she experienced a considerably different life as a Russian heiress. Unfortunately, however, she is once again held captive by Hap.

The second season of the fantasy program also introduces Karim Washington, a private detective whose assignment is to find a missing teen, Michelle Vu. Once they cross paths, Washington and OA join forces to locate Vu, as they are ultimately drawn to a house on Nob Hill that is connected to the disappearance of multiple teenagers.

All the while, BBA, Angie and the boys remain in the first dimension as they attempt to understand OA’s otherworldly reality she has described.

The OA Part II comes to Netflix on March 22.