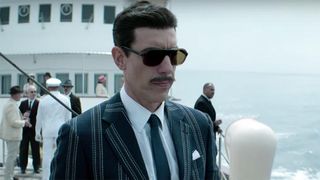 Next week Netflix will be premiering its new limited series based on the real-life story of former Mossad agent, Eli Cohen, who went undercover in Syria in the early 1960s. Here we have our first look at Sacha Baron Cohen‘s portrayal of Eli Cohen in the official trailer for The Spy.

In The Spy, Sacha Baron Cohen’s Eli Cohen will stop at nothing to be of service to his country. This in turn leads to him going undercover in Syria to spy for Mossad. As he becomes dangerously close to ambitious military leaders and their rich friends, Cohen ultimately earns an overwhelming level of trust about Syria’s biggest anti-Israel secret initiatives.

Noah Emmerich, Hadar Ratzon Rotem, and Waleed Zuaiter star alongside Sacha Baron Cohen in The Spy, which is written and directed by Emmy-winner Gideon Raff and produced by Alain Goldman and Légende Films. The series comes to Netflix September 6.