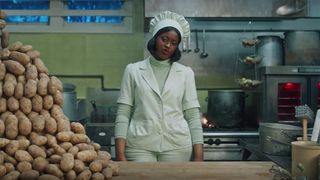 “Whack History Month” may be over, but Tierra Whack isn’t done delivering new material. This week, the Philadelphia-born rapper is back to unleash the official music video for one of her recent releases in “Unemployed,” which features production by Zane Lowe.

Whack’s “Unemployed” video was premiered today on AdultSwim.com. Directed by Cat Solen of Adult Swim’s The Shivering Truth, the clip finds Tierra in the kitchen cooking a meal out of talking potatoes.

“We love Tierra and this is just the first of several things we have planned together. It’s a joy to be able to work with a talent of her magnitude,” says Jason DeMarco of Adult Swim.

Press play above to watch Tierra Whack’s quirky “Unemployed” visual, which is airing today on Adult Swim until 9 p.m. EST. Fans of Whack can also catch the young artist performing at Coachella on April 12 and April 19.