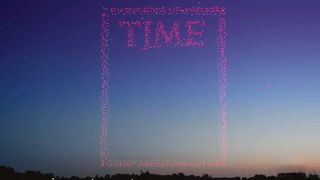 TIME magazine shared its latest cover this week, one unlike any other in the publication’s 95-year history. Partnering with Intel, TIME utilized 958 drones to create its iconic logo and red border, showcased in the California sky.

Intel’s drones are capable of being pre-programmed to create various shapes and designs, as they were also used in similar fashion during the recent Winter Olympics.

To create the first TIME cover shot by a drone, we worked with @intel’s Drone Light Show team and @astraeusaerial—plus 958 drones set to display a precise shade of red, and another one to hold a camera in the air at just the right angle. The result was one of the biggest #drone shows ever produced in the U.S., so of course it drew some attention. One Folsom, Calif., resident interviewed by a local news reporter recounted, “Up in the sky, I saw the future.” Read, and see, the full Special Report at TIME.com/drones. Drone video still by TIME

Just last month, The Weeknd got together with ‘TIME’ to discuss fame, love, and ‘My Dear Melancholy.’