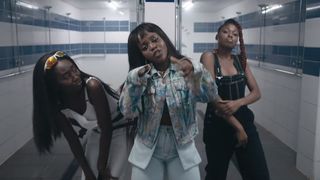 Australian singer-songwriter and rapper Tkay Maidza was on our radar last year with Martin Solveig’s “Do It Right,” and now the queen of Australian hip-hop releases the official video of her newest single “Flexin'” featuring rapper Duckwrth.

FLEXIN VID IS ALSO OUT NOW. Directed by @keenanmac thank you to everyone involved! Ily @aradjoa_nula & @jasminemcking & @didntcatchthat Link in my story 🌟💪🏽

Directed by Keenan MacWilliam, the visual was captured in London and just like the title implies, Tkay flexes her rugby skills, along with some assistance from some local players and cameos from her crew, in addition to Duckwrth himself, who brings his rock star swagger to the clip, delivering a bopping street rave.

For those of you who aren’t aware, Tkay was a champion tennis player before starting her career as a musician and performer, and according to Tkay, “‘Flexin’ is an ode to being yourself and being unapologetic for it.”

Furthermore, she’s preparing to take the world by storm with her forthcoming EP, Last Year Was Weird Vol. 1 out August 31 via Downtown Records. Peep the full tracklist below.

You can also pre-order the EP with limited edition merch by clicking the bar below.

Next up, Princess Nokia and Timbaland “Erase The Hate” on one-year anniversary of Charlottesville march.

Duckwrth Embarks on an Animated Adventure in “Sallie Mae”
MusicsponsoredJune 20, 2019

Drake Has Been Flexing This Loewe Marilyn Monroe Shirt & Now You Can Too
StylesponsoredAugust 15, 2019

Tay-K Sentenced to 55 Years in Prison After Murder Conviction
MusicsponsoredJuly 20, 2019

Op-Ed | It’s Time to Find a Better Use for Instagram Than Flexing
SneakerssponsoredMay 24, 2019