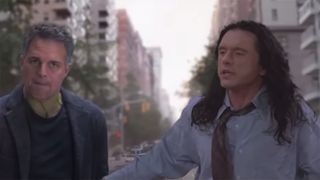 After dressing up as the Joker and placing himself in The Dark Knight, European-American actor and filmmaker Tommy Wiseau is back with another mashup, this time editing himself into Marvel‘s Avengers: Infinity War and Endgame. The remixed clip splices together scenes from the two Marvel films with Wiseau’s The Room and his his new movie, Best F(r)iends.

You’ll see familiar excerpts from Infinity War and Endgame featured throughout the video, as Wiseau’s character from The Room is cut into the frame to interact with the Marvel superheroes. Shortly after the beginning of the clip, the 63-year-old filmmaker breaks out into song, unleashing a hilarious parody with classic lines from his movies.

Wiseau collaborated with YouTubers The Gregory Brothers, schmoyoho, and PistolShrimps for the mashup, which you can enjoy now above.