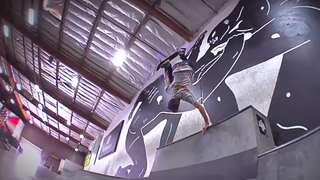 Tony Hawk and the fountain of youth inside his knee caps have teamed up for a new video part. At 51 years old, the legend hit The Berrics to film “Battle Commander.” Any doubts about his vitality will be erased as soon as you hit play and see that he’s still got it.

The elder Hawk is joined by all his kids, Spencer, Keegan, Riley, Kady, as well as his stepsons Miles and Calvin Goodman. But there’s no doubt who’s still the top dog.

The three-and-a-half-minute clip caps off The Berrics‘ Tony Hawk Week, which included a look at all the skaters he’s influenced, how Birdhouse’s first video was made, and the worst injuries of his career. Hit The Berrics’ YouTube page to see all the great videos.

For more from Hawk, check out the second drop from his signature clothing line that released earlier this month.

Deaton Chris Anthony Gets the Man Himself for His “Tony Hawk” Video
MusicsponsoredOctober 23, 2019
What To Read Next
Load More
Search Results
Load More