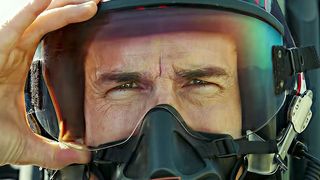 An action-packed new trailer for Top Gun: Maverick has arrived and it has us getting even more nostalgic and excited for the sequel than we were already. Watch it above.

In the movie, Tom Cruise reprises his role as Pete “Maverick” Mitchell, who is ordered to return to the Navy to train a fresh cohort of Top Gun graduates. Among them is Bradley “Rooster” Bradshaw (played by Miles Teller), the son of his late friend Goose. As in the 1986 original, the stakes are extremely high, and Maverick continues his incautious attitude to aviation, and his no-helmet approach to motorcycling. Based on the new footage, it looks like the sequel retains a lot of the adrenaline-pumping action we’ve come to expect from the franchise.

See how Twitter is reacting to the new trailer below.

My mom took me to see #TopGun when I was 4 and now we’re taking my son who will be 4 to see the new one. pic.twitter.com/4hqeWKLjB9

#TopGun I got chills. This new movie is gonna be badass! ? pic.twitter.com/m6gFCIgOUs

And hyped for Goose’s son to take to the sky

Miles Teller injected himself with Anthony Edwards’ DNA for 3 years to prepare for this movie. #TopGun pic.twitter.com/mde8u2pqmt

of bird related homages to goose for his son to pick they went with ROOSTER ?!?!!!! pic.twitter.com/SIlI2PlGqZ

Let’s just hope he makes it out alive

(Listen close and you can hear the Ghost of Goose telling him to run.) pic.twitter.com/3RujQnr3ZP

When you want to see the new #TopGun but you know Tom Cruise is a batshit crazy scientologist pic.twitter.com/GFtTWE5Exn

The first trailer premiered at San Diego Comic-Con in November. On opening day, Tom Cruise made a surprise appearance to tout an even more surprising announcement — after 34 years, the iconic adrenaline-pumping drama Top Gun is back with a sequel. Watch it here.