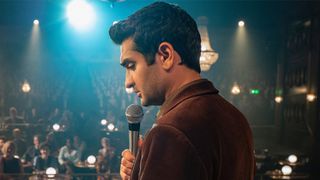 The first two episodes of Jordan Peele‘s reboot of The Twilight Zone premiers Monday, April 1 and judging by the latest trailers, it’s going to be equal parts thought-provoking and terrifying.

First off, “The Comedian” stars Kumail Nanjiani as Samir Wassan, a struggling comedian who makes a deal with the devil to improve his standup routine. The devil, played by Tracy Morgan, answers his dreams with disturbing consequences. He promises “You will get laughs, you will be successful.” As you might expect, the titular character’s life then proceeds to descend into chaos, as he questions, “at what cost?”.

Parks and Recreation’s Adam Scott is the star of the second installment, titled “Nightmare at 30,000 Feet.” The episode references “Nightmare at 20,000 Feet,” an episode from the original series, which starred William Shatner. In the original, Shatner’s character is plagued by a gremlin on the wing of plane. Jordan Peele’s reimagining seems considerably darker. Watch that trailer below.

The Twilight Zone premieres April 1, on CBS All Access.

You Can Watch the First Episode of Jordan Peele’s ‘The Twilight Zone’ on YouTube
MoviessponsoredApril 2, 2019

This Jordan Xbox One X Giveaway Is All You Could Ever Wish For
SneakerssponsoredApril 22, 2019
What To Read Next
Load More
Search Results
Load More