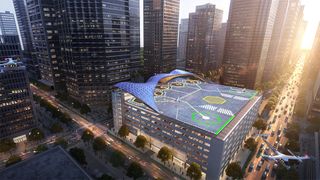 With a significant portion of its business revolving around airports, Uber plans to launch its own air taxi service, Uber Air, in 2023. Here, we get a brief look at Uber Elevate’s first air taxi cabin design users will ride in with Uber Air.

Uber is partnering with Signature Flight Support — who operates a number of private aviation terminals — for places to land the air taxi vehicles at airports. This will grant the company convenient access to high-traffic airports such as SFO, LAX, and DFW, as well as hundreds of other locations across the globe.

“The biggest value proposition of private aviation flying around in a jet, or anything else, is really the efficiency,” Signature Flight Support Chief Commercial Officer Shawn Hall told TechCrunch. “It’s not the high-end experience, it’s the efficiency. And just to give you a sense for that, our passengers will literally show up minutes before they take off.”

Uber Air is scheduled to take flight in 2023 in Los Angeles, Dallas-Fort Worth, and Melbourne. Each city will have five to seven skyports and an airport.