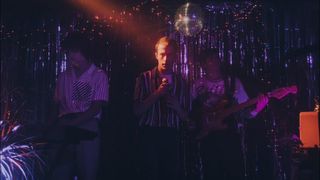 Now that Wallows has their debut EP out of the way, the Dylan Minnette-fronted indie rock band is gearing up for their full-length album. Today, the trio is sharing the lead single, “Are You Bored Yet.” The woozy track is a collaboration with Clairo, another breakout artist from 2018, and is the ultimate karaoke jam as depicted in the accompanying video.

The Drew Kirsch-directed visual features a star-studded cast including To All The Boys I’ve Loved Before‘s Noah Centineo, Vampire Weekend touring member Brian Jones, and writer-director Nina Ljeti. Wallows is expected to drop their debut album Nothing Happens on March 22 via Atlantic Records. Immerse yourself in the dreamy performance above.