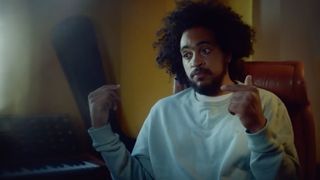 Menswear brand Farah have partnered with independent online radio station, NTS, to celebrate the emerging New British Jazz movement. A London Dance – New Movements In Jazz is a short film that captures the essence of a young and rapidly evolving scene at the centre of “the British Jazz explosion.”

The film includes cameos from some of the scene’s key players, including musician and record producer, Kamaal Williams, singer Poppy Ajudha, and members of the Ezra Collective. The artists reflect on how the melting pot of people in London is contributing to a movement that was almost “meant to happen.” The musicians cite the influence of DIY culture, less purist ideas of jazz, and a general openness to cross genre influences as all contributing to this new wave of music.

The Film Has been produced by Hector Aponysus, an editor and producer, as well as an artist who has performed live at the ICA, Boiler Room and Just Jam.

In other news, Tommy Genesis’ highly-anticipated debut album has arrived. Get all the details right here.