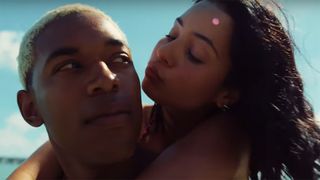 A24 shares the first trailer for writer-director Trey Edward Shults’ new drama, Waves. Starring Kelvin Harrison, Jr., Lucas Hedges, Taylor Russell, and Alexa Demie, with Renée Elise Goldsberry and Sterling K. Brown, the movie tells an emotional story about the capacity for compassion and growth during the darkest of times.

While plot specifics are scarce, Waves centers around a suburban African-American family in South Florida as they navigate love and forgiveness following a grave loss. The family is led by their well-intentioned but domineering father, played by Sterling K. Brown.

Written and directed by A24 alum Trey Edward Shults, and scored by Trent Reznor and Atticus Ross, Waves was met with rave reviews followings its premiere at the Telluride Film Festival. You’ll be able to catch the movie in theaters this November.