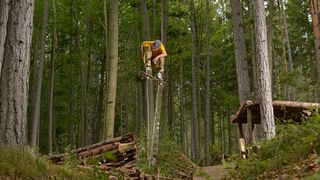 Filmed by Vienna-based former pro snowboarder Seppi Scholler and his production house Love Factory, Wheels on Woods shows the five riders landing tricks on a series of banks, bars, and rollouts constructed throughout the woodland setting.

As you can see, the rollable runway elicits some serious adrenaline. Taking a week to build, the series of wooden platforms give the course a real DIY feel, making the film way more fun than your standard urban skate clip, not to mention stomach-churning.