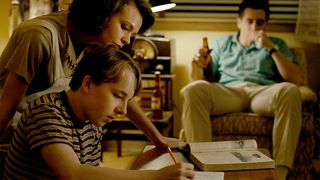 Paul Dano (There Will Be Blood, Little Miss Sunshine) premiered his directorial debut, Wildlife, at the 2018 Sundance Film Festival. The picture will in turn be making its way to theaters before the end of the year, as here we get our first look at the anticipated drama.

Wildlife serves as an adaptation of Richard Ford’s novel of the same name, starring Jake Gyllenhaal and Carey Mulligan. The story centers around Jeanette (Mulligan) and Jerry (Gyllenhaal), a housewife and a golf pro in 1960s Montana.

When Jerry loses his job, he then decides to join the cause of fighting an uncontrolled forest fire near the Canadian border. This ultimately leaves Jeanette and their son Joe (played by Ed Oxenbould) to get by on their own. As the two parents begin to struggle, Joe in turn witnesses his mother and father’s marriage spiral out of control.

For more film, watch as Johnny Depp investigates Notorious B.I.G.’s murder in the trailer for ‘City of Lies.’

Paul Dano Will Join ‘The Batman’ Reboot As Supervillain The Riddler
MoviessponsoredOctober 18, 2019