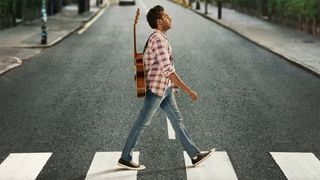 This week Universal Pictures gives us a first look at English filmmaker Danny Boyle‘s latest movie, Yesterday. The film, penned by Love, Actually writer Richard Curtis, is set in a world where The Beatles never existed.

Yesterday stars Himesh Patel and Lily James, as Patel plays Jack, an aspiring singer-songwriter who is contemplating giving up on his musical dream. One night while riding his bike, Jack is hit by a car during a freak global blackout. When he wakes up, he is welcomed into a world that knows nothing of The Beatles, leaving Jack the only one familiar with John Lennon, Paul McCartney, George Harrison and Ringo Starr, and their catalog of hits. Jack then decides to use this to his advantage, stealing The Beatles’ songs for his own, which ultimately catapults him to stardom.

As it stands, Yesterday has yet to receive an official release date.

From the director of Slumdog Millionaire and the writer/director of Love Actually comes #YesterdayMovie. pic.twitter.com/nnUp7enUlT