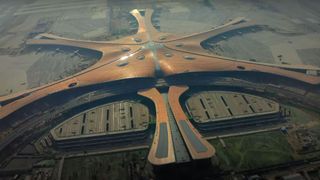 Zaha Hadid Architects has opened the Beijing Daxing International Airport designed by the late namesake of the studio. Construction on the project took nearly five years. Hadid passed away in 2016.

The massive 2,000,000-million-square foot airport is one of the largest in the world and features five aircraft piers for a starfish-like shape. In the center is a grand courtyard with a glass roof called a “central orientation space dome.” The check-in island, international and domestic security desks, and retail space are all in this area, allowing travelers to flow outward to their respective gates. Despite the massage square footage, the airport was designed to be as compact as possible to get passengers to their planes as quickly as possible. It only takes eight minutes to reach the gates farthest from the center.

“Echoing principles within traditional Chinese architecture that organize interconnected spaces around a central courtyard, the terminal’s design guides all passengers seamlessly through the relevant departure, arrival or transfer zones towards the grand courtyard at its centre – a multi- layered meeting space at the heart of the terminal,” the studio said in a statement.

Take a look at the breathtaking new airport in the video above.

7 Architects That Kanye West Would Want You to Know About
DesignsponsoredSeptember 25, 2019