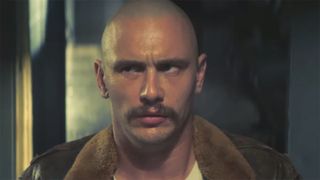 After being in limbo for roughly four years, James Franco‘s long-awaited film based on Steve Erickson’s 2007 novel, Zeroville, is finally coming to theaters. Ahead of next month’s theatrical release, this week we receive the full-length trailer for the star-studded picture.

Directed by and starring Franco, the 41-year-old actor and filmmaker portrays a film enthusiast named Vikar in 1969 Hollywood. With his shaved head decorated with a tattoo from his favorite movie, 1951’s A Place in the Sun, Vikar begins his ascent in the film industry by building sets before becoming an apprentice to a film editor. Along the way, he is mesmerized by a budding actress by the name of Soledad (played by Megan Fox), and together they maneuver along the blurred line between reality and illusion that is often associated with Hollywood.

Seth Rogen, Danny McBride, Craig Robinson, Jacki Weaver, Will Ferrell, and Joey King feature alongside Franco and Fox in Zeroville, as James’ younger brother Dave Franco will also make an appearance. The move is slated to arrive in theaters September 20.

One of the Best Nike LeBron Sneakers Ever Is Returning
SneakerssponsoredFebruary 10, 2020
What To Read Next
Load More
Search Results
Load More