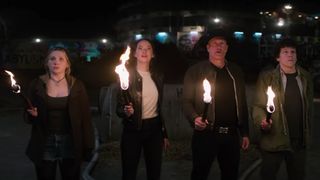 A decade after the cult hit Zombieland, the lead cast (Woody Harrelson, Jesse Eisenberg, Abigail Breslin, and Emma Stone) are back at it again making the most fun out of its apocalyptic world in Zombieland: Double Tap.

In the sequel, we find our lovable cast making their way into to Washington D.C., storming the White House, and making plenty of Monica Lewisnky jokes along the way. It’s not all fun and games however, as the four monster slayers must face off against many new kinds of zombies, as well as some new human survivors, and their own family drama. There’s also plenty zombie guts, explosions, and of course, more Bill Murray.

Zombieland: Double Tap is out next Friday, October 18. Watch the red band trailer above.

Vans’ New Double-Stacked Sole Is the Brand’s Comfiest Yet
SneakerssponsoredJanuary 3, 2020

Here’s Why Twitter Is Freaking Out Over the New ‘Fast & Furious 9’ Trailer
MoviessponsoredFebruary 1, 2020
What To Read Next
Load More
Search Results
Load More