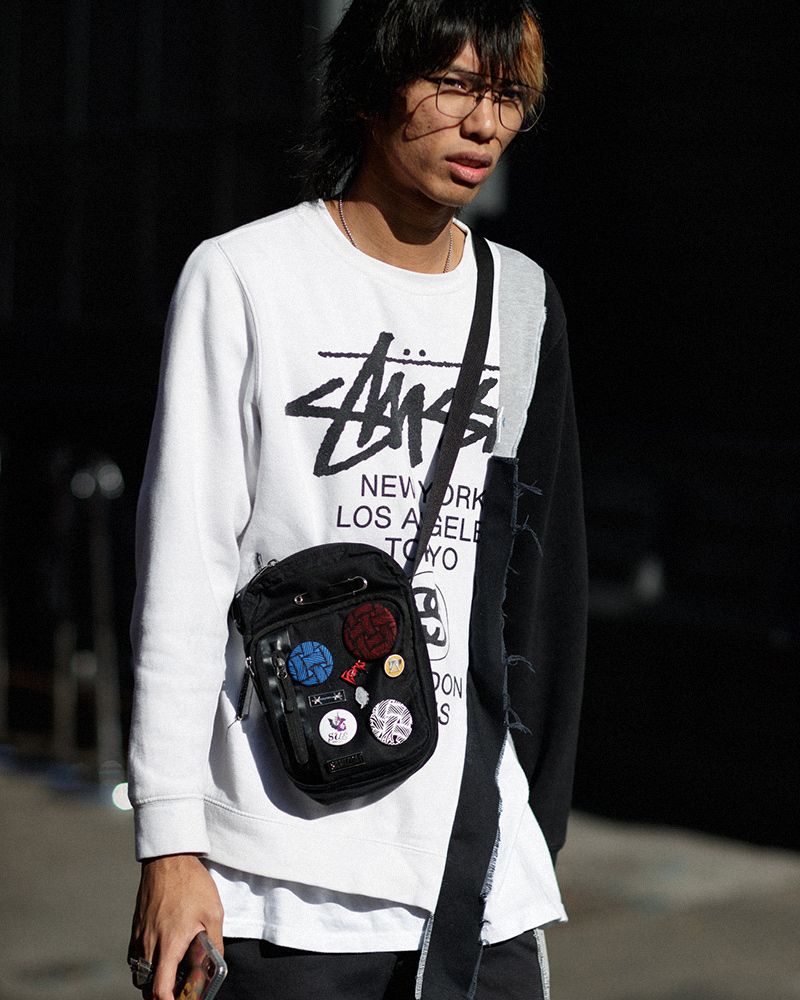 Stussy begins to shape his own surfboards at the age of 13. Two years later, he will get his first job shaping boards.

Shawn starts his own surfboard business in Laguna Beach. To make the boards more distinguishable, he scrawls his surname signature on the boards, stylized as “Stüssy.”

To help spur sales at the Action Sports Retailer trade show, Stussy screen-prints his new logo in white across black T-shirts. By the end of the trade show, he had sold 24 boards and a thousand T-shirts.

Stussy officially starts a clothing brand with his friend and business partner, Frank Sinatra Jr. (no relation to the singer).

Stussy moves the brand into a 4,000-square-foot office in Irvine, California.

The brand makes its way to Europe and is embraced by the hip-hop community. By the end of the decade, Stüssy (the brand) will have stockists throughout the U.S., Europe, Australia, and Japan.

Stüssy opens a flagship New York store with the help of James Jebbia, who will go on to create the streetwear brand Supreme while working at Stüssy. This is also the first year of the International Stüssy Tribe meeting, which takes place in Tokyo.

Shawn Stussy decides to resign as president of the company to spend more time in Hawaii with his wife and son.

Stüssy reinvents itself with help from U.S. photographer Robbie Jeffers. Jeffers suggested starting a skateboarding team and by 2000, the brand had a roster of skaters that included Richard Mulder, Danny Montoya, Scott Johnson, Keith Hufnagel (who would go on to found HUF), and Chad Timtim.

Shawn Stussy opens a new Japanese brand called S/Double — a nickname his wife gave him. The shop sells a mix of surf apparel and derby shoes.

Stüssy opens a new flagship in Toronto and released clothing collabs with Vans, Bedwin & the Heartbreakers, and Hypnotize Hearts. They also put out a short film with Jared Sherbert and a photo editorial with Tyrone Lebon.

Shawn Stussy & Dior drop a collaborative collection — Stüssy the brand is not involved.

Our Legacy & Stüssy are back in the Workshop for SS22.

Now one of the most famous streetwear brands of all time, Stüssy is a Californian skate/surf brand with an origin story in keeping with the brand’s laidback, free-spirited identity.

Growing up near California’s Laguna Beach, a famous spot popular amongst surfers and counter-culture communities, Shawn Stüssy stumbled into his business when he started out placing his distinctive signature onto his handmade surf boards in the early 1980s.

Over the next few years he began placing the Stüssy logo onto T-shirts, caps and other simple pieces, and a small local brand began to build. In 1984 he partnered up with his friend Frank Sinatra Jr. (no relation to the legendary singer), and the two began selling Stüssy as a proper brand. By the 1990s, the brand had grown to considerable size with a flagship store in New York and business expansions into Europe.

One thing that set Stüssy apart in the early days was the fact that it was one of the first brands to produce goods like caps and varsity jackets that weren’t explicitly designed for sports teams. Combined with the brand’s playful repurposing of logos such as Chanel’s double C insignia (transformed into a double S; Shawn Stüssy), Stüssy’s groundbreaking reconfiguring of traditional style rules and boundaries laid the foundation for virtually every streetwear brand that followed it.

Stüssy’s rapid global expansion influenced a number of young designers to follow in his footsteps; Hiroshi Fujiwara of Fragment Design has cited Shawn Stüssy as the person who inspired him to create his first brand, GOODENOUGH. The brand also has connections to James Jebbia of Supreme, who started out as manager of Stüssy’s NYC store, and Russell Simmons, who it is claimed was inspired to start Phat Farm by Stüssy. It is also claimed that numerous streetwear brands such as X-Large, SSUR and Freshjive were heavily influenced by the style legacy that Stüssy carved out in its early years.

One of the most famous elements of Stüssy is the famous Stüssy Tribe – collectives of like minded individuals with close connections to the brand. Funnily enough, this was first started in London by a collective of individuals that included Michael Kopelman of Gimme 5, Mick Jones of The Clash, and ‘Barnzley’ Armitage. Members of city chapters of the Stüssy Tribe were each given custom embroidered jackets with their names on. The movement spread to numerous cities including Paris, Tokyo and New York.

In 1996, Shawn Stüssy left the brand in order to focus on his family, and the brand continued to grow and expand. These days, it continues to be one of the most prominent youth labels, stocked in high street stores, streetwear boutiques and department stores. The brand’s Stüssy Deluxe sub-label produces premium, higher-priced versions of its products, as well as premium collaborations with other brands. Since leaving the brand, Shawn Stüssy has continued to make surf boards, and in recent years started a new brand, S/Double, which operates on a small scale, mainly selling in Japan.

When was Stüssy founded?

Where is Stüssy based?

What did Shawn Stüssy do after leaving the company?

It’s been over two decades since the namesake founder left Stüssy to spend more time with his wife and son in Hawaii. Since leaving the brand, he’s continued to make surfboards and even began a new brand, S/Double, in 2008. The moniker is a nickname given to him by his wife and the brand itself is more mature, with a mix of derby shoes and hand-made surf attire on deck.

Which brands began because of Stüssy’s streetwear influence?

Many streetwear brands owe their origins to the rise of Stüssy. One of the most famous links to the surf and skate label happened in New York with Supreme founder James Jebbia. As he launched what would become one of streetwear’s most iconic brands, Jebbia was working at Stüssy’s New York headquarters, which he helped open with Shawn Stüssy himself. Besides the Supreme link, Stüssy has also inspired the creation of Hiroshi Fujiwara’s first brand GOODENOUGH, Russell Simmons’ label Phat Farm, and influenced the style of brands like X-Large, SSUR, and Freshjive.

What is the Stüssy Tribe and how did it start?

One of the most visible elements of the streetwear brand is the so-called “International Stüssy Tribe”—a collective of like-minded individuals with close connections to the brand. Ironically, the first Tribe began not in the label’s sunny California home, but in the dreary streets of London with Michael Kopelman of Gimme 5, Mick Jones of The Clash, and ‘Barnzley’ Armitage. Members of the city chapters were given custom embroidered jackets with their names on it and eventually, the movement spread to cities around the world including New York, Paris, and Tokyo.

What does Stüssy stand for?

While the meaning behind the name Stüssy is no deeper than the obvious family surname, it is Shawn Stüssy’s famous signature that has become the John Hancock of streetwear. After getting a job shaping surfboards at the age of 15, Shawn spent years perfecting the craft before he began to handmake boards at 24. For these, he would scrawl his surname on the end with a broad-tipped marker. Later, he silkscreened his signature on T-shirts to help promote the boards and officially began the brand in 1984 with friend Frank Sinatra Jr. (no relation to the singer).

Sponsored Story
These Are the Best Dr. Martens Collaborations to Shop at Resale
StylesponsoredOctober 7, 2022

Dial in Your Comfort with these Zip Up Hoodies

How Shawn Stussy Created a Clothing Genre That Didn’t Exist Before
StylesponsoredJanuary 22, 2016

Stüssy’s Nike Collabs Will Look A Lot Different in 2022

Our Legacy & Stüssy Are Back in the Workshop for SS22
StylesponsoredApril 19, 2022

Hot Property: The Ultimate Kit for a Day at the Beach
Search Results
Load More