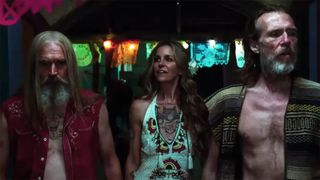 While plot details are scarce, 3 From Hell likely finds Captain Spaulding (Haig), Otis Driftwood (Moseley), and Baby (Zombie) escaping from prison to once again wreak havoc on anything and everything that crosses their path. For those unaware, Spaulding, Driftwood, and Baby were each shot multiple times by police at the end of Zombie’s The Devil’s Rejects.

A followup to House of 1000 Corpses and The Devil’s Rejects, Rob Zombie’s 3 From Hell is scheduled to release September 16.

Here it is! Your first real look at 3 FROM HELL! I know you are gonna love it! 💀💀💀💀💀go to my Facebook page for info on getting your tickets today!!!! First screening September 16th!!!!

New ‘Stranger Things’ Season 3 Teaser Gets You Ready for Summer in Hawkins
MoviessponsoredMay 20, 2019
What To Read Next
Load More
Search Results
Load More